We’ve all played some kind of board game where the question of the winner came down to the outcome of rolled dice. Have you ever wondered about the history of dice?

Dice have been some of the oldest elements used in games. Who rolled the first dice is unknown, and where it originated is quite uncertain. It is for certain that the history of the dice is rich, long, and worth some uncovering.

Some believe that shamans were the first people to throw the dice or the “astragali” as it was known then. The “astragal” refers to the anklebone of a sheep, goats, buffalo or other animals and is also known as the “knucklebone”.

It is said that the magi of the time use the bones to divine about the future; which direction to go hunting; who would take the more desirable cuts after the hunting etc. Looking at the history of the dice, it can be seen that die were made of peach stones, pebbles, pottery, beaver teeth, and buffalo bones.

Senet is a game that was played round about 3000 BCE in Egypt. It might have been a racing game linked with playing dice, but there is no consensus. The earliest Senet dice that was discovered was a 2-sided play piece that could have been used to obtain randomized numbers. 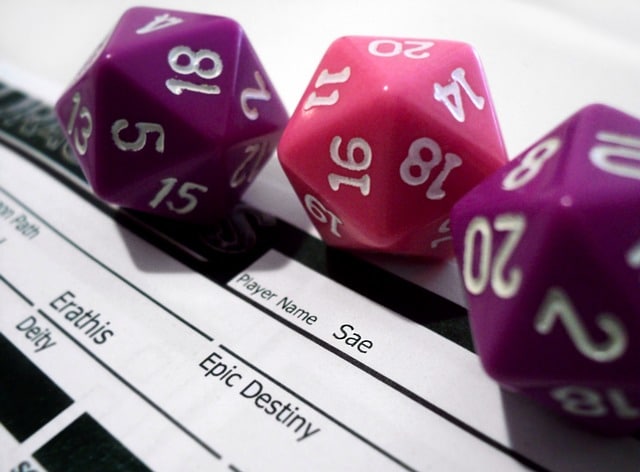 The oldest confirmed pair of dice found dates 2600 BCE. These pyramidal dice with 4 sides were found in a board game called the “Royal Game of Ur” from Sumeria. The “teetotums” are another dice variation and looks almost like a spinning top. Around 2000 BCE a cubical dice was found in an Egyptian tomb and in Tutankhamen’s tombs primitive knucklebones were found in 1333 BCE.

Knucklebones, a game of skill, were played by the women and the children. In Tuscania near Rome, cubical dice was discovered in 900BCE. In an excavation in China cubical dice were found dating 600 BCE.

The oldest mentioning of dice in written records can be found in the Sanskrit epic “Mhabharata” of 400 BCE. The oldest 20 sided dice was found in Egypt. It is dated 300 BCE from the Ptolmaic period.

A 1000 AD dice was found among the Viking grave mounds. In the early Buddhist game list, dicing, as an Indian game, is mentioned. “Casting lots” is what the Bible talks about, see Psalm 22; revealing that dicing was also a common practice during the psalmist time.

Though gambling was illegal, dicing was a very popular way of passing the time, from Roman soldier to emperor. There are recorded letters from Emperor Augustus to his daughter Tacitus, recounting dicing as his hobby.

You can read more about game dice in our latest article here: https://ipjur.com/dnd-dice/

Galileo and Girolamo Cardano are among the first in 1600 AD to subject the dice to mathematical analysis. This was the time that probability mathematics were conceived, with concepts of randomness.

An 8-sided, dated 1888 AD, poker dice was found. In 1906 a 10-sided dice was patented in the U.S. The Tokyo-Shibuara Electric-Company patents the oldest plastic 20-sided dice in 1950 AD. In 1974 AD the first sets of polyhedral dice was published and sold by Dungeons & Dragons.

There were 20-sided, 9-sided, yet 10-sided dice. The first 10-sided dice was claimed to be invented in 1980 AD. In 1985 AD the first 100-sided dice, the zocchihedron was released. If a dice isn’t a perfect cube, it won’t act according to the correct mathematical odds. These die are named a shape, a flat or a brick.

Today, most die are made out of cellulose and other plastic materials. The perfect or casino dice has sharp corners and edges, and are mostly hand-crafted. These die are also mostly used in casinos to gamble, to play craps and other casino games.

The imperfect or round-cornered dice are machine made and mainly used to play board and social games. Tampered die are known as gaffed or crooked die and are made expressly to cheat. Die as these also have a long history and were found in the ancient Egyptian and Oriental tombs, and in North and South America and Viking prehistoric graves.

When a cube is shaven on one or more sides, looking more like a brick, it will tend to land more often on one of its larger surfaces. Cubes can be bevelled as well – when one or more sides have been trimmed to give the dice a slightly convex shape. A bevelled dice will mostly land on its concave side.

“Trappers” are drops of mercury trapped inside the dice. Tapping the dice and holding it against a certain angle will cause the mercury to travel through a tunnel to another reservoir in the dice.

Dice That Travel The World

Dice have been travelling the world since the early days. Dice are small and can be quickly packed away in a pocket or in a bag. Therefore it was inevitable that dice should eventually emigrate from Europe to the New World. The French introduced the game of “Hazard” the colonials in New Orleans.

“Hazard” became very popular among the slaves, who shortened the name and came out with “Craps”, which, today, is still one of the most popular games of dice in the U.S. Monopoly became quite popular in the 20th century, which caused most households to have at least one set of dice.

The Old Dice In The New World

In Mongolia one can still find dice made from the ankle bone of sheep. The 30-sided polyhedron dice has the highest symmetrical number.

What about the no-sided die? It’s a sphere that moves with an internal weight. When it rolls to a stop one of its six numbers will be facing up. Dice are used to teach mathematical concepts.

Over the ages many shapes of die have been invented, crafted and manufactured. Many ideas for new dice have been formulated. It has been the centre of a huge amount of games and has inspired new ideas in games, cheating and in teaching.